Can Coffee Cause Gastritis? 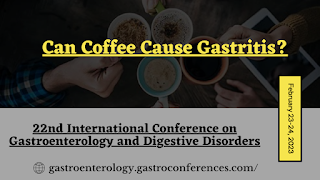 What is Gastritis? Gastritis is characterized as stomach discomfort or inflammation. In reality, the term "gastritis" refers to a broad range of symptoms. It can include stomach pain, nausea, vomiting, hiccups, indigestion, appetite loss, and an upset stomach. In addition to being brought on by bacteria in the stomach lining, bile reflux, or another kind of infection, gastritis can also be brought on by the use of anti-inflammatory medications (like aspirin), persistent vomiting, or excessive alcohol consumption. Caffeine Drinks and the Risk of Stomach Disorders: Can coffee lead to gastroenteritis? Most medical research indicates that it can undoubtedly make things worse. Some individuals simply cannot operate without their daily coffee. For those who have gastritis or other stomach issues, it could be bad news. Due to its acidity and caffeine content, coffee has a powerful effect on the stomach . There are principally two causes for this: First, because they contain caffei
Post a Comment
Read more

Are you aware of Consequences of Alcohol on GI Health in women? 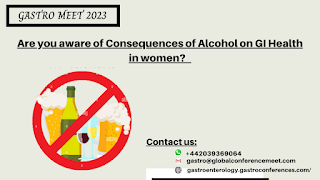 When compared to men, women are recognized to be at an increased risk from alcohol consumption. According to many research, when men and women consume the same amount of alcohol, women after drinking have greater blood alcohol concentrations and are more weakened than males. Women are more prone than men to organ damage and other injuries after drinking. Additionally, it has been seen that women who drink more frequently die at higher rates than men due to situations like suicide, car accidents, and other health issues. It's possible that gender differences, such as those in brain chemistry or metabolism , are to blame for the higher hazards of drinking. Women have a different metabolism and absorption than men. Risks Associated with Alcohol on GI Health: Salivary gland atrophic alterations are becoming more pronounced as a result of alcohol consumption. Reflux esophagitis: When you drink alcohol, the valve between your esophagus and stomach relaxes, causing your esophagus to burn
Post a Comment
Read more

Facts and Myths About Probiotics: Here's What You Need to Know 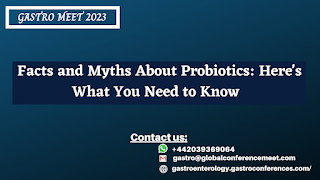 These days, "good" bacteria, or probiotics, are a popular issue in medicine. They can assist with typical digestive issues including irritable bowel syndrome in addition to potentially treating a variety of illnesses and ailments (IBS). However, how efficient are they?  Why to Use Probiotics? Live bacteria known as probiotics are present in some foods like yoghurt and kefir. By maintaining a healthy gut, these bacteria assist in keeping you healthy. (Gut health is important because it houses the majority of your immune system!) They can benefit a wide range of ailments, including: Irritable bowel syndrome (IBS) is a condition that causes diarrhoea or constipation, bloating and stomach pain. Diarrhea causes frequent trips to the restroom and a loose stool. Constipation: the inability to expel firm feces from the body Myths of Probiotics: Probiotics Can Replace Good Hygiene and Are a Cure-All Fact:  Although they could boost your immune system , they cannot take the place of g
Post a Comment
Read more 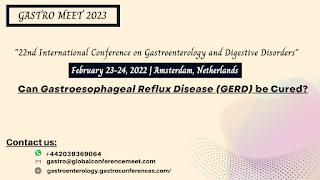 What is GERD?   The digestive system is impacted by the condition known as GERD. Gastroesophageal Reflux Disease , or GERD, is a condition where stomach acid leaks into the esophagus. Acid from your stomach backing up and hurting your throat or esophagus is what causes its symptoms. The disease known as gastroesophageal reflux is curable. Causes of GERD A weak valve or sphincter muscle at the stomach opening is the most frequent cause of GERD. When this muscle is weak, stomach acid might leak back up into your esophagus. Smoking, being overweight, and pregnancy are other causes. Symptoms of GERD Heartburn Regurgitation Dysphagia Chest pain A sour taste in your mouth Bad breath Coughing or wheezing Hoarseness Treatment for Gastroesophageal Reflux Disease: GERD can be treated in a variety of ways. It's possible that you'll need to test a few before settling on the finest option for you. Lifestyle modifications: Modifying your way of living can help lessen its symptoms. This inc
Post a Comment
Read more